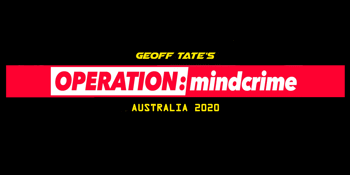 LIMITED PRE-SALE EARLYBIRD TICKETS - ON SALE THIS FRI 6 SEP @ 10AM AEST ONLY AT WWW.HARDLINEMEDIA.NET!

Multi-platinum selling, Grammy nominated singer/songwriter GEOFF TATE is regarded as one of the most skilled and iconic vocalists in the rock and metal genres. His soaring vocals combined with his complex, lyrical content and full band, provide a backdrop for a rare live experience. A voice. An album. A band. Not to be missed.

After a long, successful and critically acclaimed international run for the 30th Anniversary of “Operation Mindcrime” throughout 2018 and 2019, Geoff and the band will grace Aussie shores with a much anticipated performance of the entire album, followed by many more hits.

“Tate didn’t sound just good, let me tell you. He sounded fantastic. From start to finish, Tate was simply stellar. ‘I Remember Now’ blared through the speakers to start things off as the band prepared for the evening. ‘Anarchy-X’ then was played as Tate emerged for the start of ‘Revolution Calling.’ What followed next was Tate and his band playing one of, if not the best albums ever made, period… Tate does not disappoint.” - Shockwave Magazine