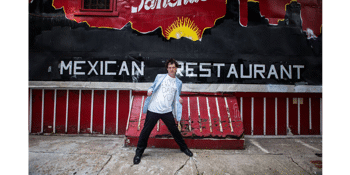 Dick Valentine is the singer of Detroit’s Electric Six, the rock and roll sleaze lords that produced the hits Danger! High Voltage and Gay Bar many years ago.  Since those songs’ release in 2003, Electric Six has consistently stayed on tour in North America and Europe and has not stopped releasing albums, having released it’s 14th studio recordBride of the Devil within the last year.  While the band has not visited Australia since 2005, Dick Valentine is returning on his own as an acoustic troubadour in the year 2020….and Australia’s collective hunger and yearning for Dick is about to be satiated.

Valentine’s acoustic shows showcase his unique vocal delivery and audiences are often left in tears of ecstasy as they experience the emotional and personal side of this man they previously only knew as a low budget disco filth wrangler.  Valentine performs stripped down versions of Electric Six favorites as well as selections from all five of his solo albums, with the attention placed on his most recent offering Illuminati Bees which will be sold directly out Valentine’s bag.

Drinks will be had, stories will be told, emotions will be mutated.  Dreams will take flight. You must not miss the triumphant return of Electric Six’s Dick Valentine to Australia after a fifteen-year hiatus.  Drop everything and be at the Dick Valentine show in your town!  To miss out would be a crime against love itself