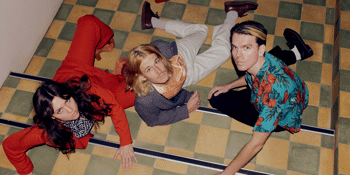 Coolangatta Hotel (Coolangatta, Gold Coast, QLD)
Saturday, 11 December 2021 8:00 PM
11 days away
18 Plus
Rock
Funk
Dance
POP
Send this event to
Australian/British band, Greatest Hits exist somewhere in the space between Sunshine Pop, 70’s groove, and Neo-Psych - Never leaning heavily enough on a particular genre to label them as such, they’ve instead established their own brand of danceable, yet vulnerable energy.

After extensive touring with bands, Hollow Coves, and Halfnoise (Zac Farro of Paramore), songwriter/producer, Ryan Cooper began work on something more accurately reflecting his influences, and was soon joined by Henry Chatham (bass), Chelsea Foley (vocals/percussion), and a rotating lineup of musicians from Leeds (England), where the band initially cut their teeth, before relocating to Australia.

On the back of being spun on BBC Radio 1 in the UK, an official Triple J add in Australia, and a huge year supporting the likes of Donny Benet, San Cisco, and The Buoys, the band’s latest release sees them working with Shags Chamberlain (Mac Demarco, Weyes Blood, Drugdealer), to forge a sound that is full of both timeless groove and modern sensibilities.