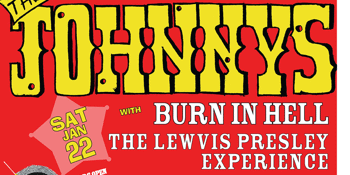 It's been a loooooong time between drinks...almost two-and-a-half years, in fact. But The Johnnys are returning to Melbourne and plan to leave no beer can unopened.

The Johnnys are playing St Kilda Sports Club and it's dancin'/drinkin' shoes at the ready when they're joined by the always inventive Burn in Hell and the certifiably Gracelands-tastic The Lewvis Presley Experience.

It's the first Johnnys show in Melbourne since early 2019 and it's sure to provide spuills, thrills and a hayride full of cowpunk fun.

The Johnnys turned on-the-road partying into an art form in the 1980s, earning a reputation as the country’s hardest-working band. Two studio albums and a live LP later, the members moved on to other things, the Beasts of Bourbon and the Allniters among them.

But the lure of songs about departing girlfriends, beer and Marty Robbins proved too strong to resist; they re-convened often and now play as a three-piece of Graham Hood (bass and vocals), Billy Pommer Jr (drums) and Slim Doherty (guitar).

Like every Australian act, The Johnnys have been biding their time and waiting for the COVID-19 chaos to subside so they could venture back out on the road. Having members located in Sydney, Melbourne and the NSW Central Coast added to the complications.

The Johnnys are vowing to have a good time that you’ll remember - even if they don’t.