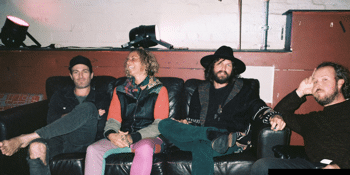 Gold Coast-based electronic-dance outfit Tijuana Cartel have returned with their new single ‘Over and Over’, the latest offering from their forthcoming album ‘Acid Pony’ – rescheduled for release on Friday June 4.

Opening with ascending effervescent synths and a pulsing kick, ‘Over and Over’ takes the listener on a multicoloured and psychedelic voyage directed by tentative percussion, captivating electronics, and the tranquil vocals of frontman Paul George. The stimulating self-production is yet another brilliant showcase of the quartet’s chemistry and maturity throughout their collective musical careers.

“I’d almost given up on vocals,” says George. “I was happily focussing on my guitar, obsessively focusing. Carey kept nudging me to sing on a track, one night he called me around 4am begging, and finally I caved.”

In the live arena, the band have kept up a relentless tour schedule, performing internationally, selling out Australian headline tours and appearing at prominent festivals including Falls Festival, Splendour in the Grass, Subsonic Music Festival and Nannup Music Festival.

“It’s all about dance,” says Carey O’Sullivan (rhythm guitarist and co-producer). “Live is where it begins and ends for us. We love to record, but in the end, people will tell us our live shows are where it’s at. All our songs of late have been with both idea of the live set-in mind.”

‘Over and Over’ is available worldwide now