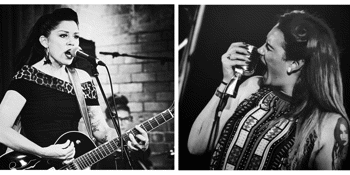 Lefty's Music Hall (Brisbane, QLD)
Saturday, 30 May 2020 7:00 pm
57 days away
18 Plus
Adult
Music
Send this event to
Get ready for a rowdy night of loud and dirty Rock and Blues as Billie Page and her killer four-piece band teams up with the incredible Swamp Gully Howlers for a one night only, not to be missed live event at Lefty’s Music Hall Saturday May 30!!

Originally established as ‘Little Billie’ in 2015, Billie Page has evolved from her traditional 50’s Chicago blues and rockabilly roots by mixing it up with an original electric twist, to produce a high-energy blues, rock and rockabilly fusion! Billie continues to delve deeper into her new, heavier blues rock vibe with her upcoming new release ‘Time & Time Again’… Stay tuned for release date announcements!

Billie performs live with her killer 4-piece band, featuring gritty blues lead guitar, punchy double bass, and hard-hitting drums. This no holes barred collective of next level musicians are undeniably electrifying and teamed with Billie’s mesmerizing stage presence and relentlessly powerful, yet (at times) cripplingly vulnerable vocals, this band is a force to reckoned with! She has performed across Australia at a multitude of blues, rock, and mainstream festivals, and recently toured the Mediterranean in with Joe Bonamassa and Peter Frampton.

Swamp Gully Howlers are a 5 piece blues rock band. Described as playing dirty, groovy, beer soaked blues rock. SGH are situated in Brisbane and have been on the scene since early 2012 formerly known as Bare White Knuckles. The band consists of Caity on vocals, James on guitar, Jayden on bass, Mike on drums and Trevor on harmonica.

SGH have a very unique sound and have played some big named festivals in Brisbane such as Dead Of winter and Mojo Burning. Check them out at Lefty's Music Hall in May!