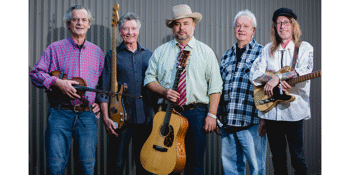 The Pub (Tamworth, NSW)
Sunday, 16 January 2022 7:00 pm
113 days away
All Ages (minors must be accompanied by Guardian)
Country
Music
Festivals
Send this event to
When Slim Dusty’s Travelling Country Band played their last full show with Slim in 2002, the band members all went their separate ways.

Fast-forward to 2016, at the Slim Dusty Music Festival in Kempsey, NSW, they found themselves on-stage together for the first time in years. And it felt like only yesterday as the old songs, friendships and memories came flooding back. One comment from an audience member, “This show has to go on the road! got them all thinking, why not? There aren’t many bands around where all the members were part of the Slim Dusty Show!

So, with the approval of Joy and the Family, Rod Coe, Mike Kerin, Jeff Mercer and Peter Denahy made the decision to take the show on the road. Over the past five years (Covid lockdowns excluded of course) the band has played tour shows across the country as well as festivals such as The Gympie Muster, Winton’s Way Out West Festival, The Winton Outback Festival, Bungendore Country Music Festival, Music in The Mulga and Ballina’s Coastal Country Music Festival. They are also booked to play the iconic Dashville Skyline Americana Festival in October.

Travellin’ Still is unique experience; five of Australia’s finest musicians sharing stories, some of their own music and of course the songs of Slim Dusty which will sound pretty darn genuine because they are being played by his own original band!

Front man Pete Denahy said he still looks forward to getting back on stage with the band.  “It’s like putting on an old comfortable pair of boots. We just love playing the boss's great old songs again,” he said. “It never gets old, it’s just so much fun.”